The Black Sun Also Rises in the West

Author and researcher Olaf H. Hage III theorized many times during his life that the National Socialist Workers (Nazi) Party literally planned to lose World War II. He further postulated that if they had tried to win the War by force and take over the world, they would lose valuable resources that they would need to maintain their "New World Order" after the War was over. (Yes, that is where President George H.W. Bush got the term "New World Order," from Adolf Hitler himself, but why not... his father, Prescott Bush was part of the Union Bank Corporation that helped finance Nazi Germany in World War II For more details, read John Loftus' Book: America's Nazi Secret: An Insider's History) It would explain why the Nazis spent much of the War moving valuable resources to the continents of Antarctica and South America when those resources could have been otherwise used to fight the War in the Soviet Union, the West, and in Italy/North Africa. It could also explain why the German Sixth Army was literally used as fodder in a questionable attempt to capture Southeast Russian and Stalingrad (now Volgograd) in 1942. When the battle ended in early 1943, some intelligence analysts started to wonder if Hitler was still in charge.

In 1941, Major General Hanning von Tresckow planned several assassination attempts on Hitler he codenamed "Operation Spark" (or "Flash" depending upon whose is doing the translating). When German armies stalled on the Eastern Front in late 1942, Major General Henning von Tresckow decided it was time to make his move. He shared his plans with Field Marshall Günther von Kluge.

He had three options planned for the assassination, but they finally settled on an option where a British bomb provided by Admiral Wilhelm Carnarias, head of the Abwher (German Military Intelligence), would be placed on Hitler's plane when it flew close to the then Soviet city of Minsk (now the capital of Belarus).

Then, when the plane blew up, they could blame the explosion on Soviet fighter planes. History claims that Vorsehun (Providence) was on Hitler's side when the bomb failed to detonate. However, the real truth may never be known. Some people still contend that Hitler died on that plane and all subsequent public appearances of Hitler were done by "doubles" of Hitler. Whether he died or not, it was becoming apparent that Hitler was only the figurehead "face" of Germany. The real decisions were being made by as ϟϟ "Deep State" within Germany led by Martin Borman, allegedly Hitler's "personal secretary" and Nazi Party chairman. The inner-circle of this "Deep State" was the Order of the Black Sun, which periodically met at Heinrich Himmler's Wewelsburg Castle in Büren, Germany.

Knowing the War was lost after the disaster at Stalingrad in early 1943, Martin Borman adjusted his "Deep State" plans to account for this prospect. Plans were made for "key" personnel to be moved to South America where the dictators would be willing "for a price" to allow them to "set up shop" in their countries. Some also suggest that he also continued to move valuable German research to Antarctica where they could work, unhindered by the Allies. The goal of the Order of the Black Sun was to control the world without having to fight another World War.

At first, most analysts would have considered Bormann's plans too ambitious, even for the craziest of the Nazis. He was smart enough to know that Germany was NOT going to win World War II, now that they have lost their Sixth Army. It has been 75 years since Nazi Germany allegedly collapsed! Yet, when you evaluate the surrender documents that supposedly ended the "European Theater" of World War II, it becomes apparent that only the German Army surrendered! The Nazi Party (especially the ϟϟ) and the German Navy has NEVER surrendered! They are still operating, but were ignored by the world... until the Corona "Plague" attacked the world in 2020. Suddenly, the world went on "lockdown" and governments suddenly moved in "lockstep" with some unknown leader suddenly "calling the shots."

Even more interesting, suddenly every world leader suddenly shed their badges of power, but they would never admit as to who is "telling them what to do." Instead, the world media and even every YouTube analyst has been left to theorize what is really going on? However, in the "plain text" of scripture, we read this:

And I saw, and behold a white horse: and he that sat on him had a bow; and a crown was given unto him: and he went forth conquering, and to conquer. (Revelation 6:2)

When we started reading the text in the original language (Greek) we noticed that in the Greek language, the word translated "bow" was the Greek word τόξον or toxon, from which we get our word "toxin." The Authorized Version (KJV) translators did not make a mistake because the word "toxin" had not become a part of the English language until 1895 when the word was likely first used in a medical treatise of some kind. However, later in the 17th century (centuries after the KJV was translated), the word "toxic" was used to describe poison arrows shot from a "bow." Now, we are accusing China of creating a toxin from "toxic bats," infecting thousands of people with it, and trying to destroy the economies of nations with it.

Yet, when we tried to develop that scenario from the Bible Codes, we totally "struck out." It turns out that China may be the biggest victim of this "toxin" of any nation in the world. Their economy is in shambles and many nations have cut off all trade, including Russia, with them. It is even more interesting that Germany's largest newspaper (Bild) was the first media to suggest that Germany go to the World Court to sue China for damages. Whether Germany actually files this international lawsuit remains open to speculation. In any case, China has now become a pariah nation because they had the misfortune of having the first Corona Plague victims. When we searched the Bible Codes, we found a different scenario:

When we reviewed this Bible Code, we found the words "Black Sun," "Pattern," and "Royals" intertwined within. We are quite familiar with "The Pattern," as we have done Bible Codes on this phenomenon, but until now, we never knew who was behind this. We have previously seen the false Phiabi Priests (the Bible Code and Zechariah 1:4 calls them "Chemarims") working within "The Pattern," but we could not see them running this. While they are experts on the spiritual side of the system, they do not have the scientific expertise to make things happen. When one objects that the Nazis and the Jews are parallel opposites, they forget that the Nazis and the Labor Zionist Jews signed the "Haavara (Transfer) Agreements," permitting the Labor Zionist Jews go to the historical Holy Land, while the "religious Jews" were left to die in the Nazi Concentration Camps. They have cooperated in the past and will continue to when they both have similar interests.

We see the Order of the "Black Sun" creating the toxin, likely with the help of a cooperating research laboratory in North Carolina, another cooperating laboratory in Wuhan, China, but with expertise in killing massive numbers of people that only the Nazis know how to do well. It has now come out that the U.S. Government has sponsored bio-labs all over the world using the research of "Operation Paperclip" scientists to create these toxins: 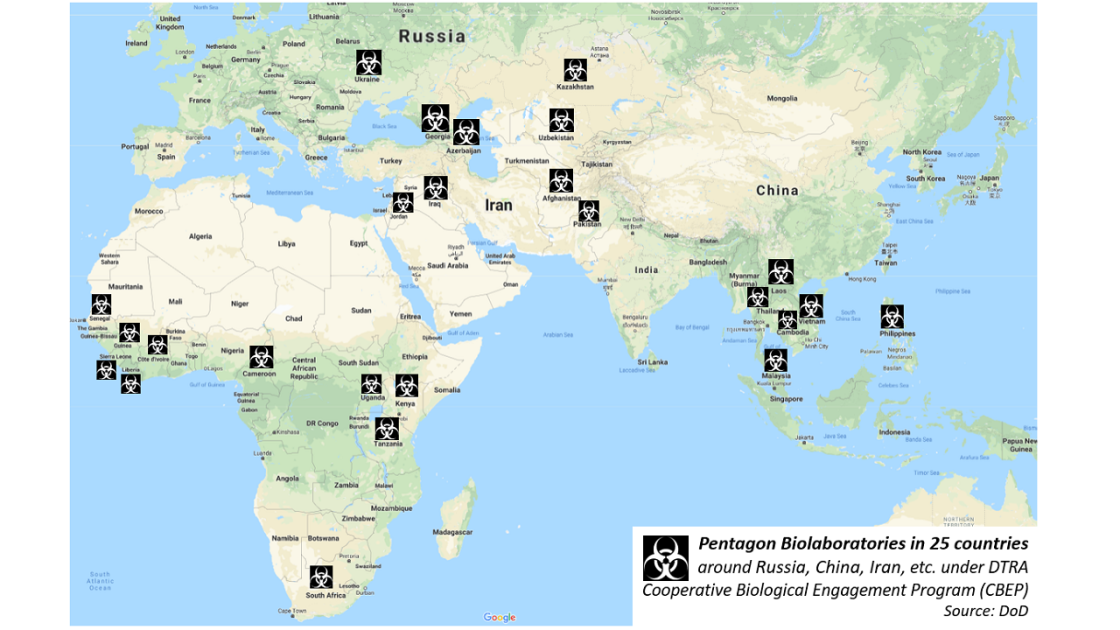 Once again, we see them creating a toxin that will turn people "made in the image of YHWH" to people made in the image of "Ancient Evil." The Hebrew words for "Giant" (Nephilm and Rapha) are there along with blood, chemical, contamination, disease, and plague. We also see "holocaust" and "The Serpent" mixed into this Bible Code. The ancient marks of Cain and his Egyptian name "Osiris" also show up in this code. Also notable in this Bible Code are the Royal Families that seem to contribute the wealth to these evil projects. Also involved in some way is the Central Intelligence Agency (CIA) which has had a liberal agenda from the day that they were formed by the Executive Order of President Harry Truman. However, even President Truman never approved of what the CIA became.

When one things of bio-labs, one only has to consider what recently happened when Russian Armies invaded Ukraine in March of 2022. While the Western media attempted to demonize Vladimir Putin and the Russian people, the Russian Army went for the now 23 bio-labs located in Ukraine. It turned out the United States was creating chemical weapons in those labs. This reminded us of an episode from the TV Show Fringe which discussed Nazi development of chemical weapons. Here is a clip from the episode.

We found yet a few more words, making this a 50-word Bible Code. We found the constellation Pleiades hidden in plain sight, suggesting that the comet-star Typhon will begin impacting this situation in another year. How, we are not sure about. We also found the word "Amulet" suggesting a delivery mechanism for this "toxin." But the most interesting word is the name of a demon named Nergal (II Kings 17:30). He is a Babylonian demon whose temple they were unearthing at the beginning of the movie: The Exorcist. We also found the demon Chemosh, the worship of which is specifically forbidden in scripture. When King Solomon built a "high places" for Chemosh and Molech in the hill that is before Jerusalem (I Kings 11:7, 33), he brought down the specific judgment of YHWH upon the Nation of Israel. Ten of Israel's tribes would follow King Jereboam I into idolatry and would eventually be scattered to the four winds, just as Moses predicted it would happen. (Deuteronomy 4: 25-31, 28:25) The Order of the Black Sun fully intends to mock YHWH at every turn with their pagan worship. The Second Temple that President Trump and others in Israel are quietly proposing to be built would very well be this horrid abomination that will bring forth judgment on the United States.

When Professor Nicholas Goodrick-Clarke, Dr. Joseph P. Farrell, and Olaf H. Hage III told us about the Order of the Black Sun, we wrongly dismissed it as "one of those funny Nazi groups" that littered the landscape of Nazi Germany, both before, during, and now after the War. We now realize that the goals and objectives of these organizations are very serious and have implications for the world we live in. Also, we need to use the Binding and Loosing Principles taught by Pastor Win Worley and Dr. Marcus Haggard to bind this organization before it is too late. If you need a guidebook to help you pray, get Jonathan van Helsing's book 21st Century Warfare Prayers. As you, the reader start doing this, we will continue to collect spiritual intelligence to aid in this spiritual warfare battle royal.

The next subject has to do with a man who was once the Director of the Central Intelligence Agency (D-CIA). In fact, he served in this capacity longer than any other D-CIA ever has. However, some wonder why it was his research that created the lists American intelligence used to bring intellectuals out of Nazi Germany and repatriate them to the United States? Click here to read the next page about Allen Dulles.