The Bible Codes and the 2012 Prophecies

A few years ago, several archeological researchers began to tell us about how the extinct Toltec Indians tribe predicted that there would be major earth changes culminating with the "end of the world" on December 21, 2012. Hollywood picked up on this theme, and suddenly several "end of the world" movies hit the big screen, prime-time television, and the SciFy Channel. Because of all the side-publicity, all these shows drew rather high ratings, as people "looking for the end" began to spend their time watching.

A lot of Christian ministries started taking an interest in these 2012 prophecies as well, despite the Bible's clear teachings against obtaining spiritual information from any other source but YHWH. Some of these ministries countered that the Toltec-Mayan Prophecies were the result of calculations and not divination. We decided that it was time to see what the Bible Codes might have to say about this. We got our hit in the book of Leviticus. 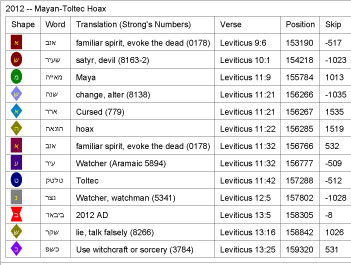 We were literally shocked to see the year identified along with the words "hoax," "lie" and "use witchcraft." After reading through this code, we soon realized that these tribes were being controlled by familiar spirits, shades (evil spirits), satyrs (evil spirits), and a class of beings called "The Watchers." (cf. Daniel 4:12-13, 23) It became clear to us that these beings were manipulating the weather to generate worship and eventually control from the Toltec peoples. It was this evil manipulation and control that destroyed this civilization.

Modern Relevance to an Ancient Code

We now see that these beings who destroyed both the Toltec and Mayan Civilizations is now seeking to destroy yet another civilization. This time, their target is the American Experiment. Their desire is the destroy an entire civilization but this time a military superpower. To do this, they have corrupted the spiritual foundation of this nation. How they have done this, will be the subject of further code study.