The Prophecy of Larry Taylor in the Bible Codes

Several years ago, when code researcher, Tom Mack was speaking at a conference, he met and shared the podium with Larry Taylor (pictured to the right). During this conference, they developed a strong bond and talked about a lot of things. One of these discussions concerned Larry's Missiles of October vision, which at that time, he had shared with very few people. Tom was intrigued with the vision and was sure it was from the LORD. He was also sure that it could be found in the Bible Codes and that the missing year could also be found in the Codes.

Larry Taylor's prophetic vision proved to be considerably more difficult to prove than any other vision we ever had ever worked with (with the exception of a prophecy John Paul Jackson had, we could not find it in the code, but then, there was a reason: the prophecy never came to pass because it was false). Most of the time, when a prophecy proved true, we could find a code that would confirm the event. This time was different. We could find the "Missiles of October" phrase several places in the codes, but he could never find a viable term to match with it. It turned out that time would be the function that would give us the answer. Until the summer of 2009, we had always come up empty. Then, we discovered this code and were astounded. It turns out, Larry's vision is only the beginning of what we would discover in the Bible Codes.

The reason Tom had so much trouble in the beginning, was because when he first tried to do this code, he assumed that either the Russians (the "bear") or the Chinese (the "leopard") would be responsible for the attack. It took him a lot of years, countless news reports, and the Key Codes to realize that the Russians would not be involved and the Chinese would only offer token support for an attack like this. The real culprits in this attack will be the Islamic country of Iran with limited support from ISIS/ISIL. Ever since the Shi'ite fundamentalists took over in 1979, their leaders have expressed nothing but anger and hatred for the United States and Great Britain (the "lion" countries). We saw that clearly in 1980 when Iranian "students" stormed the U.S. Embassy in Tehran and took most of the embassy staff hostage for 444 days.

Iran continues to be the one country in the world that hates America implicitly and would do anything it could to destroy the existing government of this nation and replace it with an Islamic Sharia-law enabled theocratic dictatorship. It has been documented from many sources that Iran now has both nuclear capabilities, a space program, and the ability to deliver missiles from their country to ours. The only problem they face right now is how to deliver those missiles without losing their ability to launch a second strike. They realize that if they fire missiles from land-based locations, our military will figure out where they are firing their missiles from and will have planes there within minutes to bomb those launching sites completely out of existence. The Pentagon is aware of these threats and continues to evaluate them continually. 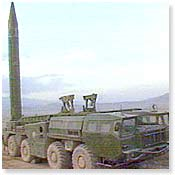 This code, discovered months before the Debka Files article was posted, showed that the Iranians would have a new way to deliver their missiles to America. They learned about this from watching their old enemies, the Iraqis, (who were fighting for their lives in Gulf War I), using their mobile Scud Missile Launchers (pictured to the right) to cause considerable problems for the American military because the launchers can be moved quickly after they have fired their load. That made them very hard to detect. The Russian arms builders apparently took the Iraqi idea one step further. They have discovered a way to put their missile launchers on cargo ships, trucks or trains. The Bible Code suggests that the Iranians will be more than happy to purchase these new missile systems and put them on ships in the Atlantic Ocean. From this position, they can fire their missiles and reach ALL of the United States, whereas their old stationary launchers could only reach the East coast of the United States at best. The most interesting thing is that they will put these missiles on ships bearing the Palestinian Authority flag. We are aware of the fact that the Islamic factions in the Palestinian Authority have not previously gotten along with the Iranians, but they will agree on one thing: The United States has to go! They also know that a preemptive strike on the United States will keep them from helping Israel.

Being aware of these facts, we now wonder why Barak Hussein Obama decided to make his first call as President of the United States to Mahmoud Abbas, the figurehead President of the Palestinian Authority? It is further disconcerting to wonder why he has met with this man so many times and apparently maintains close relations with this so-called "country." Couple that with the fact that the terrorist organization Hamas effectively controls this country and maintains it as a terrorist state. This "country" shows no qualms about lobbing ordinance into Israel without provocation and continues to argue that Israel has no right to exist as a nation.

We further wonder why Mr. Obama has traveled extensively in the Middle East and has visited a number of Islamic countries.

He even bowed before the King of Saudi Arabia in an unprecedented gesture (see picture to right). It is clear to many that he is an adherent of the Islamic religion and is doing everything he can to support his religion's efforts to subvert the government of the United States and the elected government of Israel. He has to know that the United States military is not pleased with his continued efforts to undermine the Constitution. Some military officers have even suggested in their articles, blogs, and newsletters the idea that a military coup d'etat might be in order as a first step in restoring this nation back to its constitutional roots. It may well be that Mr. Obama is using the Russian, Chinese and even the Iranian militaries to dismantle our own, so that he can be assured he will be in power long enough to build an Islamic Republic of the United States.

When Larry Taylor first got this vision in the early 1990s, we are sure he never had any idea that our nation would be in the condition it is in now. Without his vision though, we would have never discovered this code, nor would we understand the implications of Larry's original vision. Bible Code researchers must realize that they cannot discover truth on their own. They need the help of people with prophetic gifts like Larry Taylor, who will be shown the future. It is these basic pictures that give researcher the material to develop Bible Codes. We can only ask that people continue to keep Larry Taylor in prayer. Otherwise, he could very well fall victim to the Islamic elements that truly hate this country and anyone like Larry Taylor who stands in their evil way.

Click Here to Check out our New Pages Supporting this Code

The Missiles of October Links: