As we have started to learn, Ancient Evil's serpentine tentacles have reached into our society and contaminated many parts of our government. As we have started to study the workings of Ancient Evil, we have seen how they have infected the Trump Administration with its evil plans. We have seen how "Ancient Evil" has won control of President Trump's son-in-law: Jared Kushner and has used him to exert its evil influence over the Trump Administration. We have also seen how Bill Gates has sold his soul to Ancient Evil for wealth and is now forced to do its bidding in order to continue living.

But now, we have a different question to ask: Has Dr. Fauci come under the control of "Ancient Evil" and its wicked influence or is he just an incompetent "lab rat" who has spent too much time in the labs and not enough time in the "real world" as we suggested on the last page? Without the Bible Codes, we might have to give him somewhat, the benefit of the doubt... but with the Bible Codes, we get a Divine assessment.

When we take a look at this Bible Code, we see that our Heavenly Father knew beforehand about Dr. Fauci's dealings with China and how he got them to do research that he could now do legally in the United States. We see that this research is indeed there to contaminate the human genome and convert our human genes into Nephilim genes. He seems to be working in the Trump and Biden Administrations to subvert them into becoming "puppets" of the effective Seven Royal Families.

We also see that his true employers are the Seven Royal Families of Europe who believe that they have the "divine right" to rule the world! These families literally had that kind of control over the world until 1870 when the Franco-Prussian War broke out and Louis Napoleon III was deposed as Emperor of France. After that, the Royal Families lost, little by little, their control over the world. Even though they have incredible financial resources, those resources do not translate into political power. However, they are working through the higher levels of the Masonic Lodges to again regain that power. Dr. Fauci seems to be working within this Masonic structure along with Donald Trump's son-in-law: Jared Kushner to reinstall their Royal Family masters to create the "Beast System."

Drs. Fauci and Birx seem to have done their work well. Working with the Wuhan Lab in Central China, they "discovered" a contaminant designed to create a plague (remember our studies from the Order of the Black Sun section). We saw the effects of it most notably in China, but like usual, the Communist Chinese Government did everything in their power to cover-up what was going on. Their "efforts" only made their problem worse and suddenly, the virus was allows to travel overseas. It also did not help that a major world athletic event was being held in Wuhan, China, so it was easy to turn these athletes into "Typhoid Mary" carriers of COVID-19. The goal was a world "holocaust" via a "plague" that would subvert people into getting their vaccine. We see within this "chemical" a contaminant that would adjust the human genome, effectively turning human beings into Nephilim.

In this Bible Code, we not only see Nephilim, we see "Anak," a family of Nephilim mentioned in Numbers 13:22, 28, 33, Deuteronomy 9:2, Joshua 15:13-14, and Judges 1:20. The Bible Code also refers to the "Anakim," a suspicious name that was employed in the Star Wars movies. It turned out that Luke Skywalker's father was Anakim Skywalker, who went to the "dark side" and became "Darth Vader." It is interesting that George Lucas would resort to plagiarizing the Bible to get his character names, but that is not uncommon witchcraft behavior. However, the interesting element is that Anakim Skywalker was a damaged person who was "genetically-modified" by the "dark side." It has to make one wonder if these movies were not a "subtle" attempt to convince people to accept a chemical that will modify their human genome into a Nephilim genome. 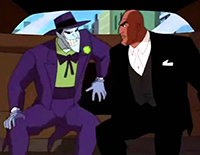 The other element that is disconcerting is the appearance of the evil spirits in this Bible Code. The most familiar one is Ashima, who we have called "the Joker" because of his attributes. However, in the spirit world, the Joker never works alone. We see Cain (AKA Osiris) and Lucifer in the picture as well. We also see "The Watchers" of Daniel 4:12-13, 17, 23 apparently being the communication channel between the mortals and the spirit world. We also see the CIA and the United Nations involved with this because they have the most to gain from this. They will know that their plans to install a world government with them on the top can only happen with spiritual intervention.

As we noted on the last page, Dr. Fauci seems to have completely abandoned the Roman Catholicism of his youth and the Jesuit religion of his collegiate days. We looked long and hard for the word "Jesuit" in this Bible Code and could not find it! Like Johann Adam Weishaupt before him, Dr. Fauci has moved on from his Jesuit roots and found a new home in "Humanism."

The Bible Codes make it clear that Dr. Anthony Stephen Fauci, M.D. is not just an elderly, incompetent doctor put in position he should not have been placed in. He is in the position because he had the ability, along with Dr. Deborah Birx to subvert the Trump Administration into making the United States its laboratory.

Indeed, Drs. Fauci and Birx have succeeded, with the help of British "researcher:" Dr. Neil Ferguson in getting President Trump to effectively order a nationwide shutdown because of a clearly overstated "Corona-virus" (COVID-19) epidemic. They usurped effective control of the United States and European economies to begin the process of bringing the world back under the control of the Seven Royal Families' "Beast System." All that remains is for them to come up with an event that will cause an "economic reset" as Engineer Klaus Schwab, head of the World Economic Forum has proposed.

Maybe one of the most mystifying elements of this Bible Code and several others we have done is the appearance of the word "Heavener" in it. The WhiteStone Foundation has done some research on an interesting Runestone in Heavener, Oklahoma and posted some of that research in a small website called The Heavener Mysteries. We will continue to research this subject and post some Bible Codes on it.