Another "Rhinemann Exchange" But "on Sterioids!"

In the last page, in a "bleeding edge" Bible Code we learn that all three factions have elements of Nephilim technology. The Communists have the Nephilim seed, but every time they fertilize one of these seeds, they get a Nephilim baby that grows to old age too quickly (known in medicine as Progeria) and then dies before it can be of any use to them.

Only the Fascists have the technology needed to slow human growth using a substance only they know how to extract from the Pituitary Gland of very young  brains. They have tried extracting genes from Nephilim remains they have found from the "Mound-builders" of the Mississippian Culture. Unfortunately for them, they could never clone them into living Nephilim.

But even if Communist Chinese "seeds" were fertilized and their growth slowed by the treatment the Fascists have discovered, what they get is a Nephilim suffering from Intellectual Developmental Disability (IDD), not capable of any rational thought. What they need is a true Nephilim soul that will give their being a mind, a will, and emotions.

The Royal Familes/Masons possess the Nephilim soul needed to create a true, intelligent being. In the last page, we learned that when Great Britain's policies dominated China, they had no problem looting whatever artifacts they wanted from any land that was in their "colonial" purvey. Sir Alexander Saxton (Christopher Lee) used his status as a knighted Archeology Professor to acquire that Nephilim soul without any objections from the local government, either in Manchuria or in Beijing. 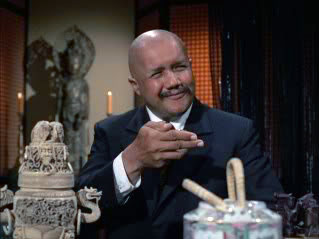 The Chinese Communists/ANTIFA know that they are dealing with two equally shrewd enemies. The Fascists are represented by the demon Ashima, a trickster demon who would love nothing better than to steal what the Chinese and the Royal Families have without having to give up their own technology. The Chinese are equally shrewd. We only have to remember Hawaii Five-O's Wo Fat to understand this (he could very well be their "Lex Luthor"). The Royal Families/Masons are equally shrewd. They have been engaging in these kinds of transactions for centuries. All the sides will have their scenarios planned out and all of them will vie to become the sole owner of Nephilim technology. Unfortunately, this Bible Code only tells us that these three parties have made a covenant to exchange technology, we don't know if they will ever succeed.

But in the final installment of this Ancient Evil-Trump Bible Code, we reached 55 words, one of the larger Bible Codes we have ever generated! We are also floored because this proposed transaction seems to be happening at the end of this year or early in the next year, making this Bible Code a "future code." This exchange will also be more complex than we first anticipated:

When we started putting "time marks" on our Bible Code, we begin to see that the Royal Families/Masons are not in a hurry to carry out this transation. They are willing to wait this out until the 2020 U.S. Election Cycle is over with. They are counting on an apparent Trump victory in the Fall, forcing the Nazi (Neo-Con) Faction and the Communist Faction to be left "out in the cold." They will be pressured to make this covenant.

The Royal Families/Masons are already planning on President Trump being returned to power in the fall elections. With that in mind, they can move forward with their own agendas and projects, the biggest one being to build the glorious "third temple." Using this, they can move forward with their "new world religion." But behind the scenes, they will work to obtain the parts of the Nephilim technology they don't have. From what we can see, they understand that having all the parts of the Nephilim technology may be key in creating the new anti-COVID-19 "vaccine" they need to subdue the world (in Revelation 13, that would be considered the "mark of the beast").

But an interesting word appears in this Bible Code. The Haganah, historically a forerunner of the Israeli Defense Force (IDF) appears and seems to be working undermine this transaction. They seem to be a resurrection of the Pre-World War II group that protected Jews in Palestine. They seem determined to hinder if not stop this transaction. In Robert Ludlum's book, members of the group, the Haganah convince the main characters in the book NOT to make their transaction. It will take another Bible Code to see if this is indeed the case.

On the Royal Families/Masonic side of the Bible Code, we see a new phrase: "House of Horus" a location in Egypt and Ethiopia that suggests their worship and their witchcrafts are a lot more complex than we initially thought. Now, we have to wonder: Is this exchange a "three-way" deal? We will keep checking.