One of the first things we discovered in our code researches is that the term "Great Britain" could not be found in the Bible Codes at any relevant range (10,000 skip rate and under). However, we did find England in a number of places, both in the Torah and in the rest of the Tenach (Old Testament). At some point in time, we hope to be able to dig out all the occurrences and learn more about the partnership between England and the USA.

It seems that after World War I, the Lion Beast swept onto the world playing field and began to dominate. England, with its Navy and the help of William Dampier (cf. A Pirate of Exquisite Mind: The Life of William Dampier: Explorer, Naturalist, and Buccaneer

), began to dominate the trade routes and effectively, the world economy. But, deep within England is another spiritual force that has driven the country since the Middle Ages and even earlier. We will learn about them in the following Bible Code: 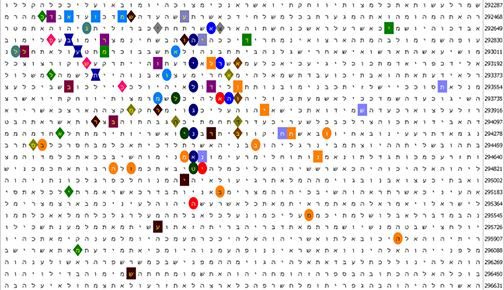 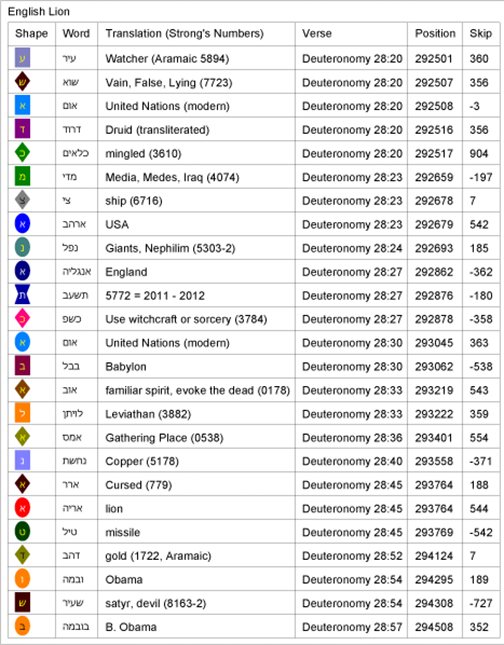 When you study the ancient history of England, you soon learn about the tribes that originally inhabited the Island: the Britons. We do not know very much about this tribe, and what we do know comes from the historical records of the Roman Empire which occupied the land in from the second century B.C.E. to the third century C.E. In some of these Roman writings, we learn of some occult practitioners called the Druids. These practitioners used their magical arts to control and dominate the people.

After the Romans departed England, the British Isles were then invaded by the Anglo-Saxon tribes out of Central and Eastern Europe. Some argue these tribes were remnants of the ten lost tribes of Israel which were resettled by the Assyrians after they conquered the Northern Kingdom of Israel (II Kings 17:5). Unfortunately, the evidence for the idea that the Anglo-Saxon tribes being remnants of the ten lost tribes of Israel remain mostly in the theoretical realm. What we do know is that one of the deities worshipped by these invading tribes was called "Gawd" (pronounced god). This deity was prayed to when its worshipper needed good fortune in business, gambling, war, or just life in general. One of the ways to placate this deity was to give his priests money (Isaiah 65:11, there the word "Gawd" is improperly translated "troop"). This code also identifies an occult sect which indirectly rules England to this day. They were called the Druids. We get many of our Halloween and Christmas traditions from these occult practitioners. Maybe the most famous of these Druid traditions is the "Christmas Tree." It is extremely rare to visit a church at Christmas time and not see at least one tree set up and decorated. Study history and it becomes clear that Yahushua (Jesus) was not born anywhere close to December 25 (if you study ancient history sufficiently, you will find that the demon-god Horus was "born" on this day). Christmas is a practice adopted from the Druids. Easter is another clear example. Most churches cannot afford NOT to practice Christmas and Easter because those holidays bring in the money to finance their operations for the rest of the year.

It is because of this money trap that most church organizations cannot break free and follow YHWH. The fear of breaking tradition brings most churches under the paw of the Lion beast. It is also why most people give money to their churches and to other Christian ministries. They think that by giving money to Christian enterprises, they can somehow bribe God (AKA as the Teutonic deity Gawd, the god [or elohim "almighty one"] of good fortune) into bringing them wealth. Beware the next time you hear a preacher or anyone else pray "Dear God" at prayer time. Nowhere in the Bible are we told to pray or address YHWH by saying, "Dear God." YHWH is our Heavenly Father and we are to address Him as, "Our Father, who art in Heaven." If a preacher continually prays to "God," then you need to consider who you are worshiping: a Teutonic god of good fortune or YHWH, the real elohim, the Creator of the Universe and our Heavenly Father. Yes, contrary to what a lot of antichrist preachers want you to think, our Heavenly Father wants a relationship with everyone reading this page. Learn more about Antichrist preachers and the Nicolaitane doctrine from our website Antichrist Watch.

Now that the trap is set and the Lion beast system controls England and the United States, we are headed for trouble. But what kind of trouble? Click on this link to visit the next page and find out.